Since the hype around the topic metaverse has started, it is often referred to as a kind of new internet. An Internet that no longer exists only in the two-dimensional space. Instead, it is an Internet in which we will operate in a three-dimensional space in the future and in which reality will be mapped into a "new " world. So will we be moving in a virtual environment in both our private and professional lives in the future? Or is it just a hype that does not affect me? So what exactly is the metaverse? Why should I deal with it in a business context? And what do I do with it in my company? What should you know in order not to miss the train? And how do you lay the foundation to prepare your journey into the Metaverse? We've collected some information for you here with our experts from the Innovation Center Network to discuss these questions and more.

Business in the Metaverse: Overhyped yet Underestimated?

It is the topic of the hour; shortly after Mark Zuckerberg changed the name of his company from Facebook to Meta, businesses around the world were scrambling to find out - What is the Metaverse and how can we position ourselves in it? Emerging from that was an inflation of Metaverse definitions, and after a few short months, more companies are placing themselves in the spheres of the emerging Metaverse than those who do not. But how can something so caught up in the throes of overhype be underestimated? To answer this question, we must go back in time…

Going back in Time: History of the Metaverse

We write the year of 1992. The whole world is trying to understand this new concept called the “information superhighway” – the thing we now know as the internet. Fascinating, really - but many don’t believe in it. It has to be a vision from the future that is too disconnected from reality to be true, right?
During those infants’ steps of the internet, Neal Stephenson is writing a sci-fi novel called Snow Crash: People are fleeing from a dystopian reality into the Metaverse, a virtual world they can visit through the usage of – amongst other methods - VR, with their digital avatars. And just like that - quite ahead of his time and other sci-fi entertainment covering the same concept (see The Matrix in 1999 or Ready Player One in 2011) - Stephenson invented the concept of the Metaverse.

These virtual worlds, though, started to emerge in our physical reality as well; an example of such was Second Life in 2003. At the time of its release a huge hype developed around the 3D simulation that envisioned a virtual world similar to our real world – to the extent that a multitude of actual companies owned spaces in Second Life. Despite the initial euphoria, eventually, the hype died down. Was it still too early for such a project to come to pass?

In 2008, then, there was Roblox, a company that enabled users to take an active role in creating their own virtual worlds and interconnect them through their provided platform – it didn’t however experience a lot of user engagement for almost a decade.
But during the course of the past 5 years - and especially during COVID - it picked up an enormous amount of pace. As of today, Roblox has over 40 million daily active users to show, is valued at over 25bn$ at the stock exchange, and most parents of kids and teenagers will be familiar with the name – because Roblox is immensely popular with their children’s generation. Some only spend time in these virtual worlds, while others even purchase items with actual money.

One - more recent - case that many might be aware of is Decentraland, founded in 2015. What is special about this example compared to the others is that it’s not only building a virtual world, where creators can own virtual land through making an investment in the “MANA” currency, but also that this is done via the blockchain and, therefore, a decentralization of ownership, as hinted in its name – it is rooted in crypto.

Have we hit the end of the road, though? Is the Metaverse simply a virtual world? This is, at the baseline, what most popular posts or blog entries would like their recipients to believe. That, however, would not be exactly innovative - as we have experienced the coming and going of these virtual worlds for many decades now.
The short answer is ‘no’. According to a large part of current positions of popular journalism, it seems that the metaverse is underestimated in its potential.

Cutting through the Hype: Definition of the Metaverse

Through the push of the entertainment industry into virtual worlds, a number of Metaverse thought leaders have emerged. Such thought leaders are Matthew Ball, a venture capitalist from San Francisco and initiator of the biggest Metaverse ETF, or Tim Sweeney, CEO of Epic Games – the company behind Fortnite and the Software Development Tool Unreal Engine. If we take a closer look at these pioneers' definitions of what the Metaverse truly is and identify some commonalities, a clearer picture of what we are dealing with will emerge. 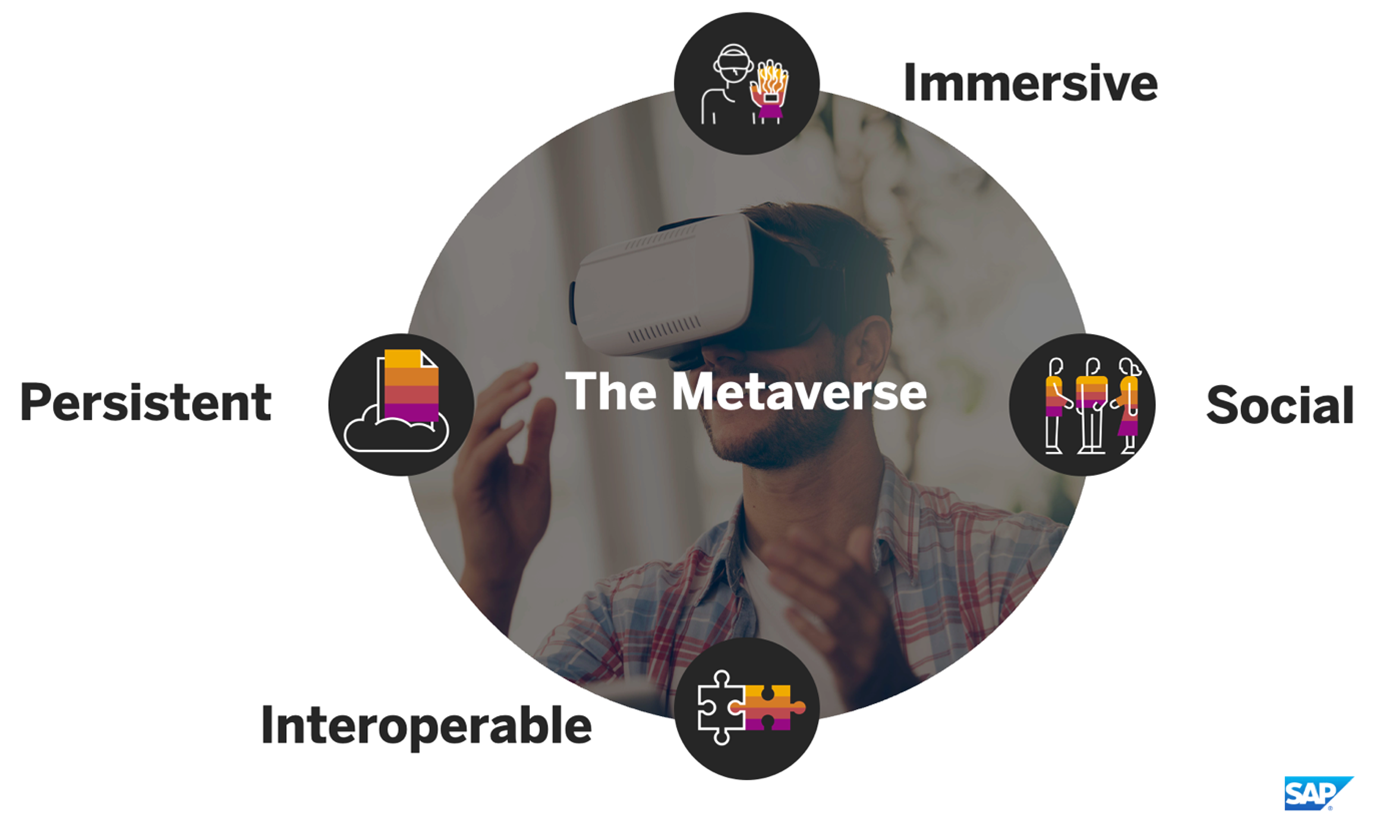 The 4 Attributes of the Metaverse

In the pre-hype era, Metaverse is defined as the next generation of our mobile Internet:


There we go! The Metaverse is the future iteration of our Internet; a network of interconnected 3D experiences, social in state, persistent in nature and interoperable, fueling a creator economy. Whilst there is no universal definition for the Metaverse as of yet, let’s go with this one for the rest of the article.
This does, though, imply that the manifold of other definitions out there are not actually representing the core idea of the Metaverse. 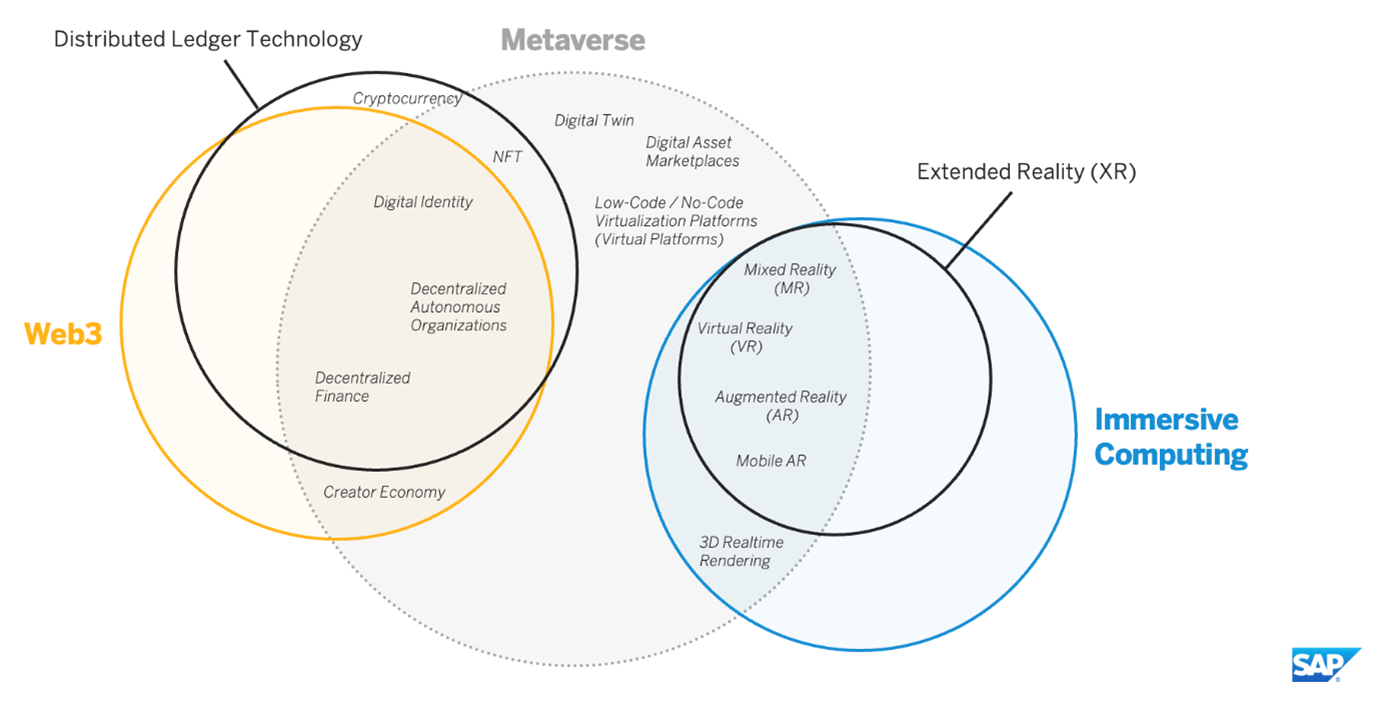 The Intersections of Trending Concepts with the Metaverse

The main issue is that there are two major trending technology areas today which are heavily intersecting with the concept of the Metaverse: Distributed Ledger Technologies and Immersive Technologies.

Immersive Technologies are referring to a visionary user experience paradigm in which human-computer interactions feel so natural and unobtrusive that they are deemed to be invisible to the user and form an indistinguishable part of everyday life. They are heavily intersecting with the Metaverse on Human-Computer-Interface topics like VR or AR (the immersive aspect of the Metaverse).

In conclusion we can note: the concept of the Metaverse is far bigger and more innovative than traditionally articulated in the market today, yet excludes most of what is described as The Metaverse by bigger players. But whilst the realization of the Metaverse vision, of a new version of the internet, might still be over a decade away – it is possible to experience a brief glimpse of what awaits.

If you want to experience the Metaverse fully today, that won’t be quite possible; as mentioned before, its realization process might very well still take over 10 more years. But still there are experiences out there – like the virtual worlds of Roblox and Fortnite, or the social experiences of, for example, VR Chat or Meta’s Horizon Worlds – that approximate some key vectors of the Metaverse and can therefore be seen as ‘proto-Metaverse’ experiences. They might not entirely meet our before mentioned definition but are on their way to get there. 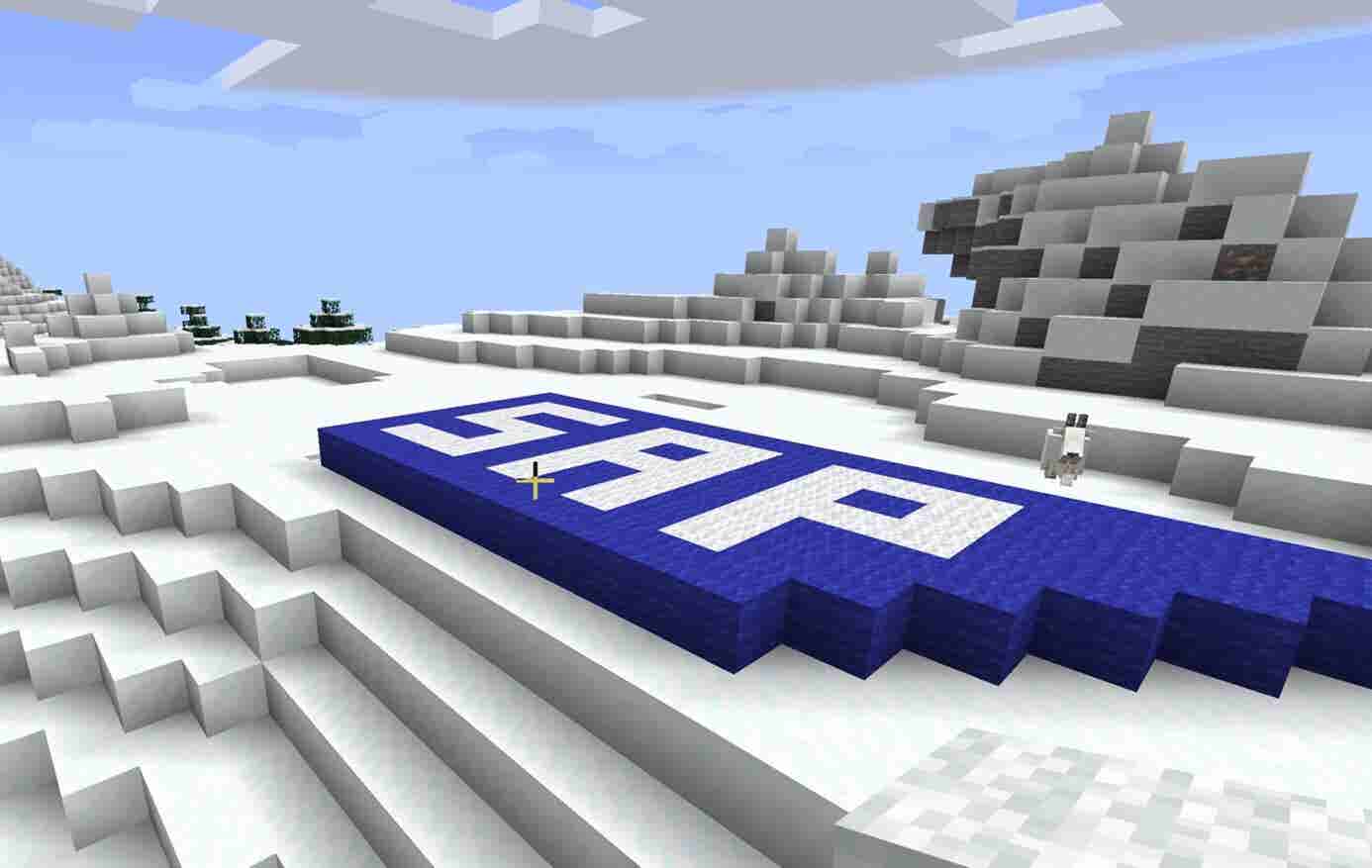 Experiences so far are not mature enough

Metaverse experiences out there are...

Whilst there are still huge obstacles to overcome, we are well on our way there and can start experimenting around in these existing experiences whilst companies like Roblox, Epic Games or Meta are building towards the bigger vision of the Metaverse. But what, exactly, can we start experiment on if feasible goals are still that far out – and how can SAP help?

The Enterprise Opportunity: Potential & Future of the Metaverse

You might now wonder what your role in all of this might be. Why should you care, quite frankly? Well, this is similar to the question that people might have asked themselves back in 1992, when the internet was still emerging as information superhighway. Currently, Bloomberg states that The Metaverse market may reach 783.3bn$ in 2024, with a particularly large market share in the live entertainment, gaming software sector and services & ads. 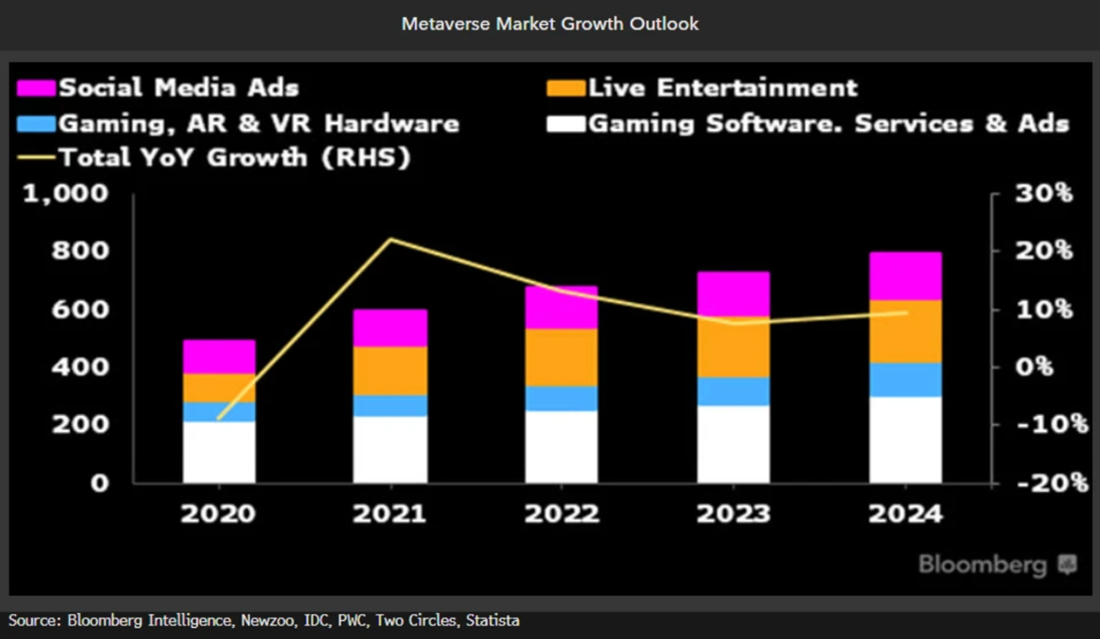 According to Gartner’s prediction, by 2026, 25% of people will spend at least one hour per day in the Metaverse managing everyday business like e.g. working, socializing and shopping. Ultimately, you could ask yourself – if in the future, people will spend most of their free time in the virtual worlds of the Metaverse like they do in the internet already today – how can you best serve them? To execute on such campaigns, you need the talent to enable such initiatives; most crucially, what is considered as ‘game’ design and ‘game’ art talent today. They know how to design a best-in-class user experience in the virtual worlds of the Metaverse. This talent, though, is some of the most desired talent in the market even today – and is usually not looking for jobs in the enterprise, but entertainment space. Starting early means attracting this talent early. But what is it you attract them with?

Some of the companies that have started experimenting early are companies with brands very close to the consumers. Take for example the fashion industry: Gucci has built its own Roblox experience, where consumers can learn about what Gucci’s brand is representing and buy Gucci clothes for their virtual avatar. Thus, Gucci not only attracts critical talent quite early, but also establishes a connection with a younger audience that will eventually grow up more natively into the Metaverse and might purchase clothing made by Gucci for their virtual avatar in the future – therefore preparing the launch of Metaverse-native products. Similarly, we can look at the automotive industry and Ferrari, launching their new car model in Fortnite with similar goals: Attracting key talent and preparing the launch of future metaverse-native products like cars that you can buy & experience in virtual worlds. 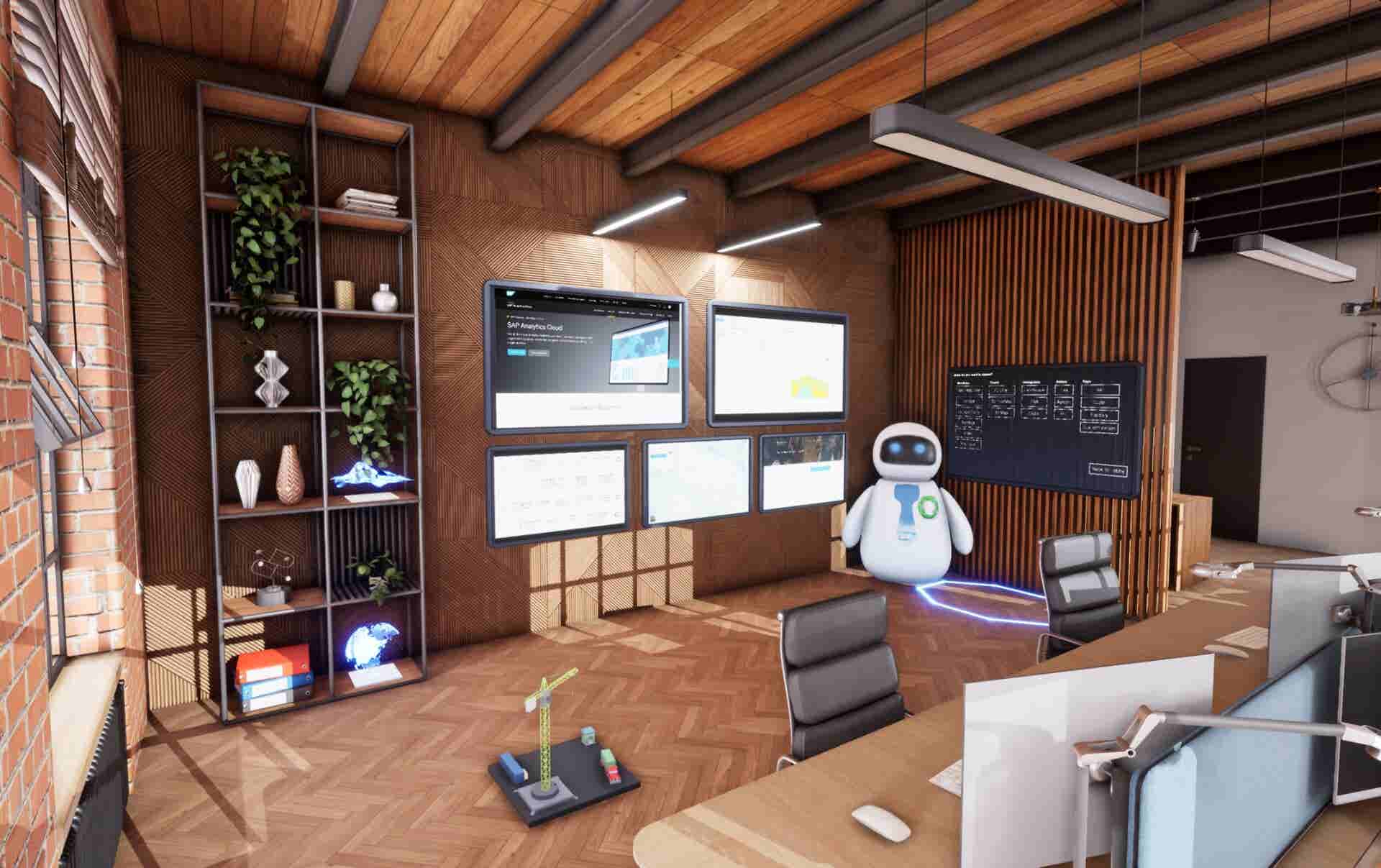 We as SAP also have exceptional talent working on the areas overlapping with the Metaverse – primarily Distributed Ledger Technology and Immersive Technology. SAP for example has dedicated XR teams that are building applications like the SAP Virtual Office to remotely work in Virtual Reality. And on the Distributed Ledger Technology side SAP also has talented teams like the team behind GreenToken – this started off as a project with the palm oil producers of Southeast Asia. We applied blockchain to make their supply chains more transparent and prove to potential buyers that the palm oil was harvested sustainably, that the environment wasn’t damaged in the process, and farmers paid fairly. Now this project is looking to innovate supply chain transparency for a variety of other industries. Although none of these examples are “Metaverse” examples itself, this demonstrates that we have the talent to be a strong player in this space.

How to approach the Metaverse in your business

These are but a few examples - but how does one figure out what, exactly, is the right fit for their business and when the right time to execute has come? It is impossible for this article alone to answer that question, but SAP’s Human-Centered Approach to Innovation is the perfect place to start: We can start by planning a workshop with you, over the course of which we explore available possibilities, and discover what fits best for your business. Technological concepts like Immersive Computing, Distributed Ledger Technology or Digital Twin might have been around for a while now, but as outlined in the article – its underlying technologies are approaching a maturity where we can reliably apply them in the context of your business scenarios. Get in touch with one of our experts to unlock your potential in the Metaverse and to be part of the discussion early. And stay tuned for our follow-up deep-dives into technologies such as VR, AR or Blockchain.

The Metaverse might be overhyped – its impact, however, is truly underestimated.